I had this big long entry written out about the shit I dealt with throughout 2014. But you know what? Who fucking cares. What matters is I have a roof over my head, the best boyfriend I could hope for, and a camera.

I have some really exciting things coming up with my photography. I am kinda bursting with how proud of myself I am and how fucking cool these upcoming projects are. But, as always, I take it with a grain of salt until it happens.

As always, I'm more active on Instagram than here. My username is @parrty

When Dom and I were first deciding to move up to Humboldt, everyone told me that it was kind of the "make it or break it" point in a relationship, meaning if we could survive a move together, we'd be fine. I didn't really felt like that applied to us because of our previous living situation (which sounds super complicated but it's not. Basically, we both lived with our parents whose houses are on the same street and both his and my parents divorced around time. Our moms are friends so Dom's mom moved in, followed by Dom).

But I'm convinced if we can make it through everything we've been through in the past few months, we're golden.

We are still working with police. Yesterday we positively identified the guy and his girlfriend in some ATM photos that the police showed us. The cop said they'll be putting a warrant out for both of their arrests with multiple felony charges. The guy and his girlfriend deposited the check less than an hour after we wrote it and closed the account a week later, and have been evicted from the house. Dom and I have let that $3675 go and don't expect to ever see it again. We've let go of it. The cop said the actual houseowner has been super helpful in giving him all the info he needs on the couple. The cop said he talked to the girlfriend's dad, haha.

We got some help from Dom's grandparents and are no longer living off Dollar Tree flank steaks and fake shredded cheese that won't even melt. Dom was on spring break this past week so we drove to Redding with the intention of staying the night until we realized we hate it. Then Dom was trying to take a picture on the Sun Dial Bridge, leaned over the side and his iPhone fell out of his shirt pocket. Aghhh haha. It was right on the shore, a heavenly mix of "it smashed on the rocks THEN fell in the water". Luckily, we can now pay the $200 insurance deductable for a new one.

I'm just so so so so so grateful for Dom's secret rich grandparents. We're not gonna be homeless!

Thanks for your comments, by the way. They put a big smile on my face. I know not many people use LJ anymore so it means a lot that you guys read my babbling bullshit, haha

( Collapse )
anyway all those pictures are from my instagram which i use way more than pretty much anything. username: parrty

i'm still around, doing stuff. i recently got a fire lit under my ass because after dom gave me the eatbeast magazine, we were talking about how i don't take pictures as often anymore and how i get discouraged and all that. a few years ago i took a color photo class at the community college nearby and the teacher failed me. dom has a friend who is heavily involved in the photo department, knows the professors well and hangs out with them a lot. the teacher who failed me is a friend of hers. dom and her were catching up and he told her about the magazine he made for me. (dom later relayed to me) after talking about it for a bit, she revealed he failed me because he saw potential and felt i didn't care/wasn't trying. that seriously bummed me out. i don't know if i worded all of that correctly. that's ok though, i know what i meant.

Dom is talking about his love for a retired musician. He also just got his first substantial paycheck.

Me: "If you keep it up at this job, you can hire him to sing you to sleep."
Dom: "Let's just hire him to play at our wedding."

- Something that made me smile today.

Posted via LiveJournal app for iPhone.

I know it's been a long, long time since I've made a picture post. But, I still take pictures and if anyone still reads this, I post (sometimes) on flickr but I'm really bad at updating.

And in these poor times of mine, I've made a "portfolio" on tumblr which is at jessyparr.com, which is updated more often.

updates:
i'm a blondie haay.
i'm still unemployed.
i'm going to vegas on thursday.
after 27 years of marriage, my parents are divorcing.


“if you cannot get rid of the family skeleton,
you may as well make it dance.”
- george bernard shaw

i dyed my hair.

dom and i made this cover.
Little Red Riding Hood by parrty 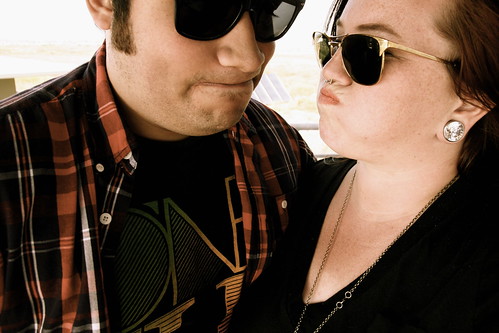 i have a lot to update on. but for now, i will just say that i'm in a fantastic, healthy relationship and i'm happy. this picture was taken on my birthday a couple weeks ago (i'm 26! yikes) and we had just totally hung out with a bald eagle named franklin.

i'm still taking pictures and have some ideas up my sleeve. i haven't posted any pictures on here in awhile, hopefully i can make some time to do that.

oh and i quit my job. i've been done for a long time. it was a last minute decision and i'm not sure what the last straw was but i'm pretty sure crying for the millionth time on my way to work had something to do with it.